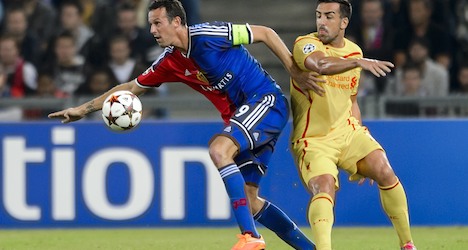 In the last three years, Basel have beaten Manchester United and Tottenham Hotspur in European competition and won home and away against Chelsea, and on this occasion a solitary, scrappy goal in the 52nd minute from captain Marco Streller inflicted a damaging defeat on Brendan Rodgers's side.

A tenacious Basel team were worthy winners, even if they were left hanging on at times as they tired in the closing stages, and the Swiss champions indicated that they must still be taken seriously in the group as they bounced back from a 5-1 thumping at the hands of Real Madrid two weeks ago.

But Liverpool, having already struggled to beat Bulgarian rookies Ludogorets Razgrad 2-1 at Anfield, must now be dreading a double-header with the defending European champions in which they will put their prospects of reaching the last 16 on the line.

"The goal we conceded was far too soft and it is not the first one," said a frustrated Rodgers.

"When you concede a soft goal like that it is difficult, away from home against a side who have a good record against English teams."

"It is a big victory for all of us against a historic club like Liverpool and the players they have," said the Portuguese.

"It was a perfect evening."

The Reds, through the pace of Raheem Sterling and Lazar Markovic in particular, set themselves up to try and hit their hosts on the counter-attack, and Sterling had an effort disallowed for offside in the third minute.

However, a lively Basel had taken only 21 seconds to force the game's first corner and were not unsettled by the loss of their Swedish left-back Behrang Safari to injury with only nine minutes on the clock, even if Sousa responded by switching to a three-man defence as he sent on the Paraguayan winger Derlis Gonzalez.

Streller had a shot deflected wide before Mohamed Elneny forced a save out of Simon Mignolet with a curling strike from the edge of the area.

Mignolet was also called into action to deny Geoffroy Serey Die after the Ivorian had cut inside both Jose Enrique and Dejan Lovren inside the box, before the visitors finally livened up in the final 10 minutes of the half.

Nevertheless, with Mario Balotelli wasteful, they did not seriously test Tomas Vaclik in the Basel goal, the Czech saving comfortably from a Sterling shot and a Lovren header.

Rodgers must have had strong words for his players at the interval but they did not have the desired effect.

Instead, Liverpool were fortunate not to concede a penalty when Sterling appeared to haul down Gonzalez in the box and then required Mignolet to come to their rescue again with a save from Ahmed Hamoudi after Elneny's pass had cut open the defence.

But Basel opened the scoring from the corner that followed as Liverpool's well-documented defensive problems were laid bare once again.

When Taulant Xhaka's ball in from the right was deflected goalwards, Mignolet did well to save, but Streller was quickest to react to the loose ball, scrambling it over the line.

It was no less than Sousa's men deserved for their efforts, although they were almost pegged back within five minutes, Fabian Schaer making a vital block to deny Markovic in the box.

Balotelli then finally showed a glimpse of his quality from a viciously struck 35-yard free kick that was boxed away by Vaclik before Markovic's follow-up was deflected behind.

Sterling's poor touch saw him squander another chance while Balotelli had a goal ruled out for offside as Liverpool limped to a worrying defeat and extended their sluggish start to the season.