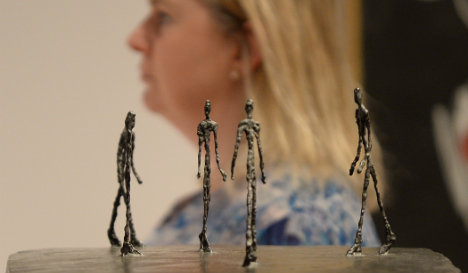 The bronze and wood sculpture of a slender female figure atop a chariot with oversized wheels was created in 1950 by Giacometti, a sculptor, painter and draughtsman who died in 1966.

"With its connotations of healing, strength and magic, this heroic sculpture is a symbol of renewal following the Second World War."

Also up for bid will be Amedeo Modigliani's "Tęte," which the auction house called "a revered masterwork of 20th century sculpture."

The work is a two-foot-tall limestone sculpture of a masked woman, created by the Italian artist around 1911-1912 and could sell for more than $45 million, Sotheby's said.

"'Tęte' has a truly mesmerizing aura and is recognized to be the greatest Modigliani sculpture in private hands," Shaw said.

Both works will go on sale at Sotheby's Impressionist and Modern Art sale in New York on November 4, the first time the sculptures will appear at auction.