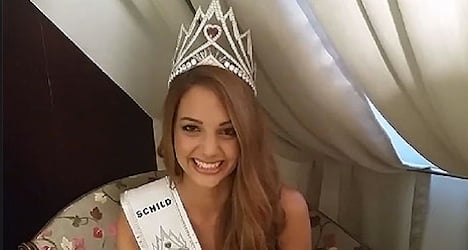 Bern cantonal police arrested a total of 20 people on Saturday night and early Sunday morning as a small group of protestors “heckled”, blew horns and whistles and chanted about the sexist nature of the pageant.

In a statement issued on Sunday, cantonal police said they arrested a group of individuals who were disturbing the televised event, held under a prefab tent in the plaza in front of the parliament buildings.

Police, who were on hand to ensure security at the pageant, said they arrested the individuals after repeatedly asking them to leave.

Among those arrested were those who “passively resisted” arrest by sitting on the ground while others assaulted officers, the cantonal force said.

A second group attempted to disrupt the event by chanting slogans and waving banners.

In an apparently related action at around 4am, a dozen masked demonstrators threw bottles at a police building and adjacent vehicles.

Police said seven teenagers were among those arrested, with 18 people released and two people kept in custody for alleged involvement in the attack on the police building.

“The fact that women are still crowned for their beauty in a show produced in the 21st century sucks,” Tamara Funiciello, a representative of the youth wing is quoted as saying.

Other critics were concerned that the federal square, a public area in front of the parliament buildings, was used for the beauty pageant.

Laetitia Guarino, a 21-year-old medical student from Froideville in the canton of Vaud, was crowned Miss Switzerland for the coming year, an honour that carries with it a 120,000-franc ($126,000) salary.

Guarino was chosen by voters from the TV audience and a celebrity jury that included Jade Jagger, daughter of the Rolling Stones’ Mick Jagger, and movie star Ursula Andress.