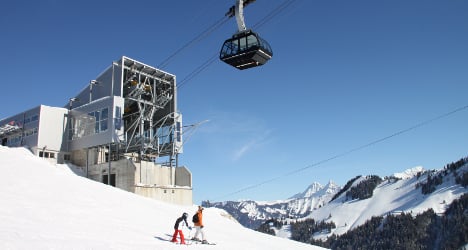 The increase in prices will go some way to recoup this year’s investment by ski resorts in infrastructure, restaurants, accommodation and snow cannons estimated at between 300 and 500 million francs in 2014, SBS reported on Wednesday.

However, one resort out of three will not raise its prices at all, said SBS after surveying some 50 ski lift operators in the country.

Swiss resorts are at a disadvantage to competing ski areas in surrounding European countries because of the high value of the Swiss franc against the euro, which makes costs higher for tourists from the eurozone.

But for the third consecutive year SBS said it will run a schools programme aiming to get young people on the slopes at a reasonable cost.

The Snow Teen Camp offer, backed by the Swiss federal government, allows schools to book an all-in-one trip for their students, including return travel, accommodation, ski passes and rental equipment, for a competitive price.

In good news for skiers in Valais, those heading to the 4 Vallées ski area will still be able to ski over all five resorts (Verbier, Tzoumaz, Nendaz, Veysonnaz and Thyon) with a single ski pass after ski lift operators signed a new 18-year agreement.

The combined area – Switzerland’s third largest – broke up earlier this year after a dispute over revenue sharing.

But in September, lift companies finally agreed to renew the collaborative agreement binding them together for another 18 years.

Customers who have already bought the new Verbier Grand Ski lift pass – created as a replacement for the 4 Vallées pass – will be automatically upgraded to the full pass at no extra charge.