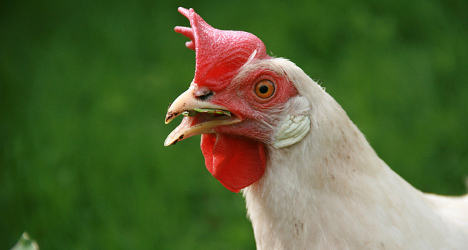 The chicken was decapitated and disembowelled. Photo: Karen Jackson

Dog walkers found the chicken in Budé park near the Hotel Intercontinental on Wednesday, reported newspaper Le Matin on Friday.

Its throat had been slit and its innards removed. It lay on a white sheet saturated with blood, along with white candles, a child’s vest, jeans and jumper, pieces of squash and potato, eggs and grains of corn.

“It seemed like a voodoo ceremony,” said Jean-Philippe Brandt, spokesperson for Geneva police.

“It’s disgusting! There are plenty of kids who play in this park,” said one, whose dog came across the scene on Wednesday afternoon.

Residents bagged the remains and took them to a local animal protection group, where the corpse of the unfortunate fowl was put in the freezer.

The affair is now in the hands of Geneva’s Food and Veterinary Affairs Service (SCAV) which intends to launch an investigation.

However, killing a chicken in a voodoo ceremony is not necessarily against animal protection laws, SCAV’s spokesman Laurent Paoliello told Le Matin.

“It all depends on the manner in which the animal was killed, if it was stunned or not before being decapitated,” said Paoliello.

The incident is the latest in a spate of bad behaviour in Budé park which has pushed local residents to the edge.

Residents have decided to launch a petition in the hope that surveillance cameras will be erected in the area.