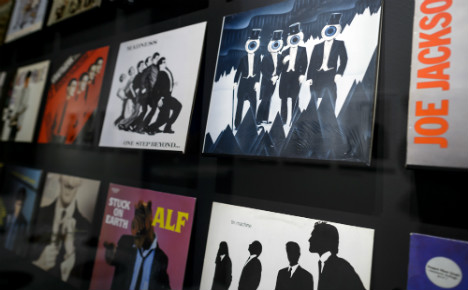 A wall of album covers showing singers wearing ties or bow ties is photographed during the exhibition "The Tie: men fashion power" at the Swiss National Museum in Zurich. Photo: Fabrice Coffrini/AFP

They speak volumes about their wearer, whether sported by British regimental veterans and university alumni, or US presidential hopefuls — red for Republicans, blue for Democrats.

The subtle tie-codes at various points in history are set out step by step for visitors to the Zurich-based museum.

"The concept of the exhibition is to show the different facets and contexts of the necktie and also that it had different meanings depending on the era," co-curator Joya Indermuehle told AFP.

Ties of various kinds were long worn as a symbol of social and political status.

They emerged in the 17th century when French aristocrats adopted the cravat, originally a simple scarf worn by soldiers from Croatia.

The name cravat was a nod to "Hrvat", to the Croatian word for a Croat.

Among the treasures on display in Zurich is a long lace cravat worn by Christian VII, king of Denmark and Norway, at his coronation in 1767.

From more recent history is a tie offered to US president Jimmy Carter in 1979 by American artist Jeffrey Vallance.

Vallance's "Cultural Ties" project involved sending neckties to a host of heads of state and asked them to give him one in return.

Alongside the somewhat psychedelic tie is a letter Vallance received from the White House.

"Although we can appreciate your interest, unfortunately, the President receives so many requests for souvenirs and other momentos that it is not possible for him to comply with all of them. He believes it would be unfair to make an exception in this case when he has not do so for others. I hope you will understand," it says.

Beyond monarchs and politicians, the exhibition also spotlights ties in the art world, including those of Port Art icon Andy Warhol, or from the punk movement.

Others include one sported by German actress Marlene Dietrich, in a sign of the rebellious androgeny of the post-World War I Berlin cabaret scene.

A section of the exhibition is dedicated to women's ties.

"We wanted to show that there were contexts probably not so much known, like for example the women neckties in the 17th century," said Indermuehle.

While aristocratic women had adopted neckwear, ties became a mark of the female challenge to male dominance from the 19th century onwards.

"It became a statement later on when George Sand or Colette started to use it as a symbol of emancipation," said Indermuehle.

Despite that, neckties have remained a largely male preserve.

Zurich is a fitting location for the exhibition, given that quality cloth for ties fuelled the prosperity of a city now best-known for its banks.

In tribute to the Zurich manufacturers of the past, the exhibition includes a section of cloth production, with a huge image of a design used on the weavers' "Jacquard" looms.

Britain was Zurich's main export market in the 19th century, joined by the United States and Japan in the 20th century.

The sector was vulnerable to shifting economic winds, noted historian Alexis Schwarzenbach, who is researching the Zurich silk industry.

"The devaluation of the dollar in the 1970s practically wiped out the American market," he said.

With ties no longer deemed essential in many circles, they have become a way to personalise men's style.

"Tie-wearing has lost its obligatory side and returned via fashion," said Isabelle Lartigue, head of menswear at Parisian trend-spotting company Peclers.

On the catwalks, ties are this year facing tough competition from flowing scarfs, though retro-style knitted ties with square tips are back in, she said.

In Italian fashion, the current trend is to deploy ties in "almost theatrical style", said Lartigue, while American designers are opting for ties that match the colour of the shirts.

The exhibition runs until January 18.