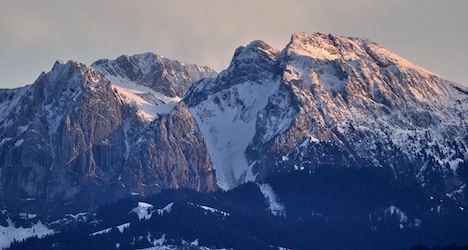 View of Fluebrig mountain where the passenger of a tandem paragliding pair died in a crash. Photo: Roland zh/Wikimedia Commons

The pair crashed into a rock wall in the Fluebrig mountain area of the canton of Schwyz, cantonal police said on Sunday.

Shortly after taking off they got into trouble for unknown reasons and struck a rock face at Diethelm in the Schywzer Mountains around 3pm Saturday, police said in a statement.

The passenger suffered injuries that were so serious he died after the crash, the statement said.

The pilot, also aged 61, suffered serious foot and arm injuries and was transferred by a rescue helicopter to a local special clinic, police said.

One hour later, elsewhere in the canton of Schwyz another mountain accident claimed the life of a 28-year-old man in Alpthal.

Cantonal police said the man was descending the Kleiner Mythen mountain with a 27-year-old colleague when for unexplained reasons he fell off a 150-metre high cliff.

The colleague contacted emergency rescue officials who recovered the body.

Police said the causes of the accident weren't immediately known.

In another mishap in the canton of Vaud, a 23-year-old man died on Saturday afternoon while hiking on the massif of Gummfluh.

For undetermined reasons he slipped and fell 150 metres to his death, Vaud cantonal police said.