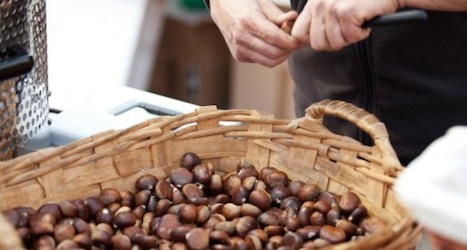 Swiss residents eat close to 2,000 tonnes of chestnuts every year in the form of desserts such as vermicelli or roasted on a grill and sold on street corners, according to federal figures.

But an invasion of gall wasps, originally from Asia, has depleted yields and led to quality problems.

Last year, about one third of the chestnuts harvested in the canton of Solothurn contained worms and about 15 percent were moldy, the SonntagsBlick newspaper reported on Sunday, citing information from a cantonal report.

The gall wasps arrived in Switzerland from Italy and began affecting harvests in 2010 in the cantons of Ticino, Valais and Vaud.

In Ticino, yields have fallen from 60 tons in 2006 to around 100 kilograms this year, the SDA news agency reported.

The federal office of food safety and veterinary affairs has set up a working group to develop a plan, expected to be ready for 2016, to tackle the lower chestnut harvests.

The gall wasps attack checkout trees, weakening the tree and reducing its foliage without actually killing it.

One solution is to introduce another Asian wasp, “torymus sinensis”, which is a natural enemy of the gall wasp.

This insect has already surfaced in Italy, where it is expected to have a beneficial impact on next year’s chestnut harvest in Italy.

It is not yet permitted to import the gall wasp’s natural enemy into Switzerland but officials believe it has already begun to cross the Swiss border.

Chesnut trees near the Italian border are expected to produce better harvests next year, an official for the Swis federal institute for forest, snow and landscape told told the NZZ am Sonntag newspaper.