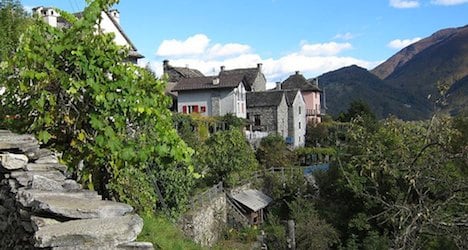 Village (Borgnone) in the Centovalli region of Ticino, near where the accident occurred. Photo: Thomas Wenger

The accident occurred around 4.20pm near the village of Moneto, where two men were felling trees, Ticino cantonal police said.

The victim lost a saw and in a bid to retrieve it, for unexplained reasons slipped and fell 100 metres down a ravine, police said in a statement.

A Rega emergency rescue team arrived on the scene only to find the man was already dead, the statement said.

The victim was a resident of Bellinzona, a town in the Italian-speaking canton in the southern part of Switzerland.