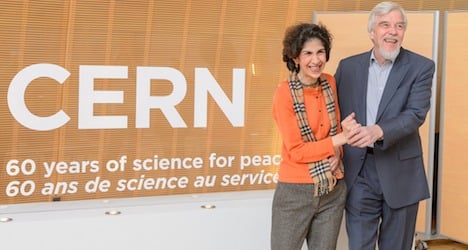 Gianotti, who joined CERN in 1987, was project leader from 2009 to 2013 of the Atlas collaboration, one of two teams tasked with finding the Higgs boson particle, for which scientists had been searching for over 40 years.

Italy's President Giorgio Napolitano was quick to applaud the 52-year old's appointment, saying he was "hugely and sincerely pleased".

Gianotti was selected by the centre's ruling council and her new role will be officially confirmed in December.

She will replace Rolf Heuer, who presided over the launch of the Large Hadron Collider (LHC) used to find the Higgs boson.

"Being the future director of CERN is a huge honour, distinction and responsibility," Gianotti, who will take up the role in January next year, told journalists as Italy celebrated her appointment.

"I will try to maintain CERN's role on the front line in the fields of scientific excellence, technology, innovation, education and international collaboration," she said.

Her appointment "confirms, once more, how Italy and its talents are able to compete with success on the international scene and how scientific research deserves a more fitting investment of resources by our institutions," Napolitano added in a statement.

Leader of the lower house of parliament Laura Boldrini, a longtime campaigner for women's rights in Italy, said she was "proud that an Italian is leading CERN and, for the first time, a woman."