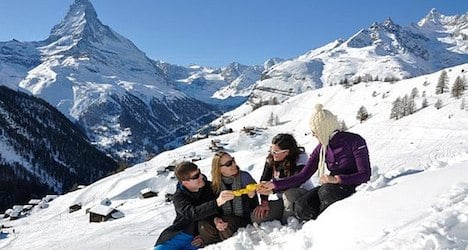 The town famous for its views of the Matterhorn beat out Serfaus-Fiss-Ladis in Austria and Arosa in the Swiss canton of Graubunden in the 2014 Best Ski Resort Awards unveiled on Thursday.

Five out of the top 10 resorts are in Switzerland in the survey published by Liechtenstein-based Mountain Management Consulting in cooperation with the University of Innsbruck.

The rankings are based on a survey of 47,935 skiers and snowboarders (from beginner to expert) quizzed on the slopes of 55 selected ski areas in the Alps last winter.

Zermatt was highly rated for its snow conditions as well as its extensive pistes.

The car-free town was last month ranked among the world’s top ten towns and cities to visit in 2015 by Lonely Planet, the travel guide.

Next year it is celebrating the 150th anniversary of the first ascent of the Matterhorn.

Because of a glacier served by lifts it is possible to ski year-round at Zermatt, which boasts the highest ski area in Europe, with the top lift ascending to an altitude of 3,883 metres.

However, only three of its 54 lifts were operating on Thursday.

More information on the Best Ski Resort Awards is available in French and German here.