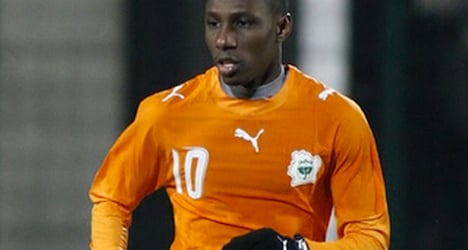 Zurich midfielder Yapi-Yapo was sent to a clinic for treatment of serious injuries. Photo: Jean-Marc Liotier

The 32-year-old midfielder faces a lengthy spell on the sidelines as a result of damage caused when Aarau's Sandro Wieser appeared to slam his foot down on his knee.

Yapi-Yapo was carried off the pitch on a stretcher after the 19th minute tackle by Liechtenstein midfielder Wieser.

Zurich catalogued the list of injuries suffered by their key player which included torn anterior and interior cruciate ligaments, serious cartilage damage, meniscus tear, a torn kneecap and deep bruising in his thigh.

Doctors treating Yapi-Yapo at Zurich's Hirslanden clinic forecast he would be out of action for a long period.

FC Zurich's president Ancillo Canepa lodged legal proceedings for intentional injury against Wieser, who apologized for his actions after the game.

"I totally regret what happened," the 21-year-old posted on his Facebook page.

"There was absolutely no intent on my part," he added.

"I've had a lot of experience with injury and I don't wish that on anyone."

He said that Yapi-Yapo was a former teammate of his (at FC Basel) and described him as "a great guy".

Yapi-Yapo won the Swiss league title and domestic Cup with Basel, and was part of the Ivory Coast squad at the 2006 World Cup in Germany.