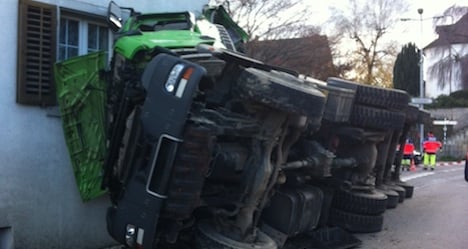 The accident occurred at around 11am when a 23-year-old man lost control of the truck he was driving through Schwerzenbach, northeast of Zurich, cantonal police said.

For unknown reasons the driver lost control of the vehicle, pulling a trailer, on a gently sloping curve of the community’s main street, police said.

The truck slammed up against the wall of an apartment building, disgorging its load into a ground-floor suite and the front yard.

The driver suffered minor injuries and was taken to hospital by ambulance after managing to clamber out of the cab unaided, police said.

No-one in the building was injured but the crash caused considerable damage.

The truck itself was a write-off, while a structural engineer was hired to assess the damage to the dwellings.

The village’s main street was temporarily closed as a result of the accident.

For more pictures showing the sugar beets in the home and yard, check the German-language Blick site online.