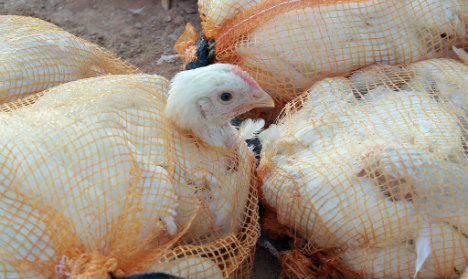 The Swiss move, announced on Friday, came into effect on Saturday and applies to live chickens and chicks as well as eggs from the affected zones in the two countries, the Federal Office for Food Security and Veterinary Affairs said.

Belgium meanwhile ordered poultry owners to confine their birds as a precautionary measure following the outbreak in neighbouring Holland.

The Dutch economic affairs ministry confirmed that a second bird flu outbreak detected on Thursday on a farm at Ter Aar, close to the first case east of The Hague, was the highly pathogenic H5N8 strain, previously detected only in Asia.

Some strains of avian influenza are fatal for chickens, and pose a health threat to humans, who can fall sick after handling infected poultry.

Bird flu was detected on three other farms in and around Kamperveen, about 100 kilometres (60 miles) north of the first outbreaks, the Dutch economic affairs ministry said in a statement on Friday.

The birds on all three farms will be destroyed and the farms disinfected, the ministry said, with tests being carried out to establish if the strain is the highly infectious H5N8 strain.

Britain has also reported an avian influenza outbreak at a duck breeding farm in Yorkshire, northern England, which on Tuesday was confirmed to be H5N8.

The H5N1 strain of bird flu has killed more than 400 people, mainly in southeast Asia, since first appearing in 2003.

The H7N7 strain of avian flu severely hit the Netherlands in 2003 with health authorities destroying some 30 million birds in an effort to quash an outbreak.

There are some 95 million chickens on Dutch poultry farms and egg exports totalled some €10.6 billion ($13.2 billion) in 2011, according to the latest Dutch statistics.