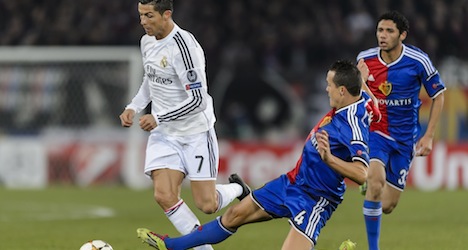 The Portuguese superstar converted a Karim Benzema cutback ten minutes before half-time at the St Jakob-Park as the reigning European champions, who had already qualified for the last 16, secured first place in Group B with a fifth win in five games.

Ronaldo's goal allowed him to move level with former Madrid striker Raul as the tournament's second-top scorer of all time, three behind Lionel Messi, who broke the record with a hat-trick for Barcelona against APOEL on Tuesday.

And the goal secured their 15th consecutive victory in all competitions, a sequence that began with a 5-1 defeat of Basel at the Santiago Bernabeu in September.

Carlo Ancelotti's men have therefore equalled the record that was set by Miguel Munoz's team in 1960-61 and then matched three seasons ago under Jose Mourinho.

Meanwhile, Basel, who had won their previous two home games, fought admirably with 17-year-old Cameroonian forward Breel Embolo proving a real handful, and despite the defeat they know that a draw with Liverpool at Anfield in a fortnight will take them through to the knockout stage.

Ancelotti gave Keylor Navas his Champions League debut in goal in place of Iker Casillas and handed a start at right-back to Alvaro Arbeloa with Dani Carvajal absent due to illness.

However, James Rodriguez, Gareth Bale, Benzema and Ronaldo all started in attack and it was the latter two who combined to break the deadlock in the 35th minute after a closely-fought opening to the game.

Benzema was the architect with a superb run in from the left to the byline, from where he cut the ball back beyond the reach of goalkeeper Tomas Vaclik for Ronaldo to score.

Ronaldo might have moved another goal closer to equalling Messi's record early in the second period, but his fizzing free-kick was turned around the post by Vaclik.

Bale also crashed a shot off the woodwork but it was not always a comfortable evening for the visitors, with Shkelzen Gashi slicing a shot high and wide for Basel from a great position after fine work by captain Fabian Frei, the shot striking the hand of Sergio Ramos on its way through.

And the exciting Embolo held off Raphael Varane before attempting to round Navas, only for the Costa Rican goalkeeper to narrow the angle well and make a terrific save to turn the ball around the post, but Basel's performance gave them plenty of reason to be optimistic ahead of that crunch trip to Liverpool.

Ancelotti believes they have the ability to beat the English side.

"Right now I think Basel are better than Liverpool," he said.

"The Swiss side have good fitness and are well-organized," he added.

"It won't be easy at Anfield but the Swiss have a little advantage."

Basel's Portuguese coach Paulo Sousa said he thought his team could have got more out of the game but said he was confident about progressing.

"I'm disappointed because I think we deserved more from this match," he said.

"When Ancelotti says we have an advantage on Liverpool, I think he has a point."