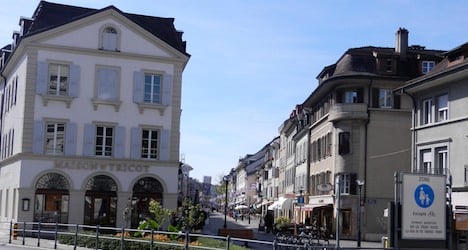 Police said they arrested the Swiss man last Friday following a two-and-a-half week investigation following the discovery of the woman’s body in an apartment on November 4th.

Officers found the body after noticing a strong smell in an apartment building in downtown Morges, police said.

The officers were involved in dealing with an unrelated landlord-tenant dispute, the 20 Minutes newspaper reported.

Police said officers forced opened the door of an apartment to find the decomposed body of the victim lying on a bed.

The suspect now being detained admitted to killing the girl following an argument on the night of October 28th.

An investigation is continuing to establish the exact circumstances of the case.

A restaurant operator in Morges told 20 Minutes that the victim was a former employee who worked as a waitress at the establishment in August and September.

“They (the couple) came to eat at my place in mid-October,” the restaurateur is quoted as saying.

“Everything seemed to be going very well.”

The woman had just begun a training programme at the beginning of October.

A neighbour said the couple had frequently quarrelled, 20 Minutes said.

The victim was buried in a private ceremony in Lausanne last Wednesday, the newspaper said.