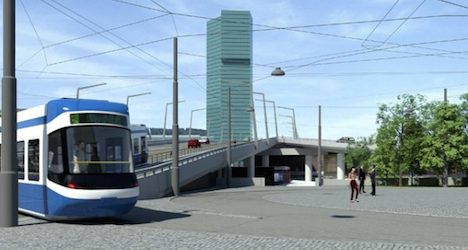 Rendering of what the new tram line will look like with the Hardbrücke and Prime Tower in the background. Photo: City of Zurich

More than 66 percent of citizens on Sunday backed the cantonal share of 76.4 million francs for the Hardbrucke tram line to serve Zurich West, despite a campaign against the project led by socialist party politicians who argued it was too costly.

An infrastructure fund supported by the federal government is being tapped for 45.4 million francs and city of Zurich is kicking in 7.8 million francs, the city said.

Jointly managed by the city and the canton, the new line will extend tram line 8 from Hardplatz via the Hardbrücke road bridge across a set of railway tracks to the Hardbrücke train station and on to Werdhölzli via Escher-Wysss Platz.

Construction is expected to be complete in 2017.

The line is one of several transit projects to serve the fast-growing Zurich West area, a former industrial area that is being redeveloped with such buildings as the Prime Tower, a 126-metre-high office building that is currently the tallest in Switzerland.

The city on its website hailed the “resounding yes” given to the project by voters, saying that it underlines the importance of public transport in Zurich.

But two days after the vote, the city-owned transit authority VBZ was grappling on Tuesday morning with a case of sabotage.

City police said a group of individuals vandalized 100 transit vending machines by pouring paint into slots for coins and credit cards, rendering them impossible to use.

Police believe several people committed the acts between midnight and 4.30am and that they used motorized vehicles, 20 Minuten reported.

Police have issued an appeal for witnesses and VBZ has filed a criminal complaint.