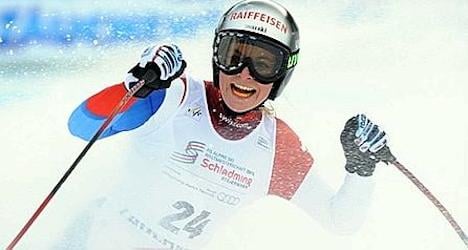 The 23-year-old native of Ticino came ahead of American Lindsey Vonn and Tina Maze of Slovenia.

The finish marked a promising start to the season for Gut, who claimed the Super-G World Cup title for 2013-14 and also won in the category at Lake Louise a year ago.

With a time of one minute and 18.46 seconds, she finished 0.37 seconds ahead of  Vonn, who marked a triumphant return with a downhill victory at the Alberta resort on Saturday after missing most of last season with a knee injury.

Switzerland's Dominique Gisin, gold medal winner of the downhill at the Sochi Winter Olympics, was 15th.

"It is the first time I am able to win at the same place twice," said Gut.

"It is funny that it happened in Lake Louise," she said.

"The course set was kind of straight. You had to risk it all. Once in the finish area, when I saw the good lead I had, I thought this was cool."

Gut, who competes in all five disciplines but specializes in the speed events, claimed her first Olympic medal in February by winning bronze in the downhill at the Sochi Games.

"It was a phenomenal weekend for me," said Vonn.

"I felt like I was skiing aggressively," she said.

"I am happy with second place. It was a solid day."

The weekend podiums have ignited her comeback after the four-time overall World Cup champion tore her right knee ligaments and broke a bone in her leg in a super-G crash in February 2013 at the World Championships.

She returned to racing nine months after the accident but her comeback was cut short when she re-injured the knee, forcing her to miss the Sochi Olympics where she had hoped to defend her 2010 Olympic downhill title.

"I am so happy with my results here this weekend," she said.

"It is so much more than I had hoped for."

Reigning Olympic downhill champion Maze got her speed season off to a flying start on Friday by winning the first race of a weekend downhill doubleheader.

Maze edged out Gut for downhill gold in Sochi, finishing in a tie for first with Gut's Swiss teammate Gisin.

The events were originally planned for Courcheval, France but lack of snow there led to them being transferred to the Swedish resort.

The giant slalom is set for Friday followed by the slalom on Saturday.