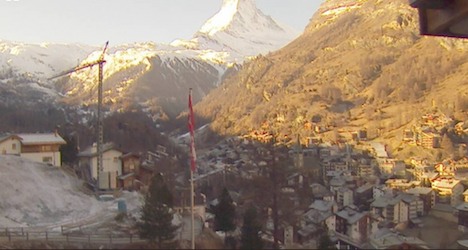 Webcam image shows village of Zermatt without snow despite its altitude of 1,608 metres. Photo:Screenshot/Zermatt.ch

Christmas and New Year’s fall on Thursday this year making it easier for skiers and snowboarders to take long weekends or a week’s holiday in the mountains.

So many Swiss resorts, such as Verbier in the canton of Valais, or those in the Jungfrau region (Wengen, Lauterbrunnen), are fully booked for the week of New Year’s, the ATS news agency reported.

Resorts such as Adelboden and Gstaad (canton of Bern), Zermatt (Valais) or Villars (Vaud) have reservations levels close to 85 percent, significantly above the same period last year.

But lack of snow is preventing some tourists from making a commitment.

Adelboden, which has not yet opened for the season, has had virtually no snow for three weeks, although the flakes are forecast for the next few days.

A shortage of the white stuff has hit neighbouring resorts in the French Alps, where World Cup ski race organizers were forced to transfer events scheduled for Courcheval in the Savoie region this week to Ar in Sweden.

Verbier advertised only five of 39 pistes open on Monday morning, while Wengen is set to open next weekend but was reporting a snow base of just 20 centimetres.

Skiers will have better luck at St. Moritz, in the canton of Graubünden, where the Corviglia resort some of its lifts open and higher elevation slopes were open on Monday.

The nearby Corvatsch resort had its main lifts operating and higher elevation pistes were open but the Furtschellas ski area remained closed and webcams showed no snow in the village.

Davos in the canton of Graubünden reported several of its upper lifts were operating but nearby Klosters was still closed.

Webcams for Zermatt showed no snow in the village but the ski area offered the most terrain open for skiing in Switzerland with 204 kilometres of pistes and lifts linking to Cervinia in Italy open.

MeteoSwiss, the national weather office, offered little hope for significant accumulations of snow until next weekend at the earliest, despite sub-zero temperatures in the mountains.

On the plus side, the cooler weather is allowing resorts with snow making equipment to build a base.