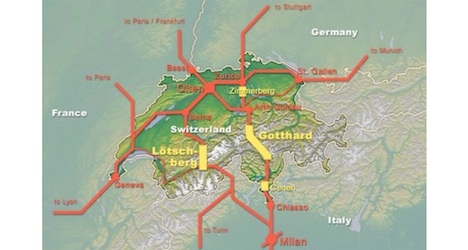 The mammoth multi-billion-franc project to complete the 57-kilometre connection, bored beneath the Alps, is set to be operational on December 11th 2016, SBB officials said at a press conference at Erstfeld in the canton of Uri.

The tunnel, with two separate tubes on the north-south axis linking Germany and Italy will allow for quicker and more reliable transport of cargo, faster passenger service and 50 percent greater rail capacity.

When it opens the trip between Zurich and Lugano in there canton of Ticino will be 25 minutes shorter than today, the SBB said in a news release.

Further improvements, including the completion of the 15-kilometre Ceneri base tunnel in Ticino, set for 2020, will reduce the train trip from Zurich to Milan to less than three hours from the current four hours.

The base tunnels cut the gradient of existing lines allowing for higher-speed trains to operate.

The tunnels are part of the AlpTransit project, which includes the 35-kilometre Lötschberg base tunnel beneath the Bernese Alps, budgeted at more than 16 billion francs ($16.5 billion).

The goal of the project is to improve rail links and reduce transport truck road traffic through the Alps for environmental and logistical reasons.

SBB said a total of 25 projects, including the Ceneri tunnel and improvement of numerous tunnels in Ticino, are under way between now and 2020.

Once all that work is completed, the volume of freight carried between Rotterdam and Genoa, Italy will increase by 20 percent.

SBB said the number of passengers travelling through the Gotthard base tunnel will rise from 9,000 to 15,000 by 2020.

New train sets are being ordered for the route.

SBB said 3,900 people were being trained for the maintenance, safety and operation of the Gotthard base tunnel.

Two centres for “intervention” are set for Erstfeld and in Biasca in the canton of Ticino.