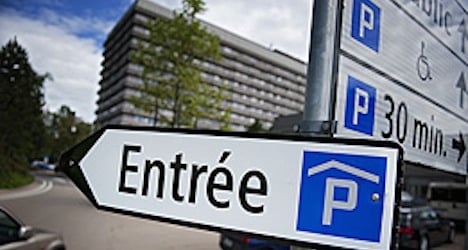 Weighing three and a half kilograms, the boy was born outside the M2 station at the Lausanne university hospital (CHUV) before the couple could actually get to the maternity ward, the 20 Minutes newspaper reported.

“We had left our Lausanne residence a little after 5am after having left our 15-year-old daughter with a neighbour,” the father, an Algerian health-care worker told the newspaper.

“A tax driver refused to take us because, according to him, my (pregnant) wife was going to dirty his vehicle in case she gave birth,” he said.

Luckily, the couple could count on someone else with a more generous spirit.

“A bus driver of the TL (Lausanne transit authority), who had not started his operations, had the kindness to drive us to the Riponne (a square in the city centre),” the husband told 20 Minutes.

Once there they took an M2 train to the hospital stop.

“Coming out of the Metro we took the elevator,” the father said.

“There remained just a few steps that lead to the hospital square,” he said.

In a fit of panic the husband ran to the maternity ward where he asked for a stretcher on wheels and for help, 20 Minutes said.

“Once my son was born one of the (nurses) took him and ran to the hospital to get him warm,” the father said.

The infant, called Daoud, appears to be none the worse for his challenging entry into the world.

“It was very hard,” the Swiss mother told 20 Minutes.

“But the midwives worked very well.”

Darcy Christen, a spokesman for CHUV, was quoted as saying such births were rare “but our professionals know to prepare themselves for the most unexpected situations.”

Out of 8,000 births annually in the canton of Vaud, around 50 are the result of “out of the ordinary” circumstances.