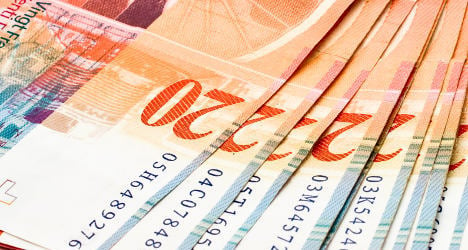 The bank said it was imposing an interest rate of minus 0.25 percent on sight deposit balances at the central bank with the aim of taking the Libor rate — the rate used by banks to borrow money — into negative territory.

The action comes as the euro has recently traded consistently at the 1.20 level against the Swiss franc, the floor that the central bank has defended since September 2011.

In a statement, the SNB reaffirmed its commitment to holding the line on this rate “with the utmost determination”.

With the Russian rouble plunging as a drop in the price of oil exacts a cost on the Russian economy, combined with lingering concern about the European economy, demand for Swiss francs —a traditional safe haven currency in times of crisis — has risen.

The SNB said by introducing negative interest rates it is making it less attractive to hold Swiss franc investments and is helping maintain the cap on the franc.

But the bank said in addition to this measure it is "prepared to purchase foreign currency in unlimited quantities and to take further measures if required".

The rate will be charged effective January 22nd and is applicable only on accounts of more than $10 million so most individuals will not be directly affected.

But the bank said it may extend the application of negative interest rates if necessary.

SNB President Thomas Jordan has long indicated that the franc is over-valued.

The negative interest rate raises the spectre of customers having to pay for the right to put their money in a Swiss bank.

But Jordan told a press conference on Thursday morning that he assumed that it would make "no sense" for banks to pass on negative interest rates to small savers.

Currency traders reacted to the central bank's move by selling off the franc against the euro, easing the rate to 1.2087, a drop of 0.6 percent in early morning trading.

The franc also fell against the US dollar, which was trading at around 1.02 francs early Thursday.