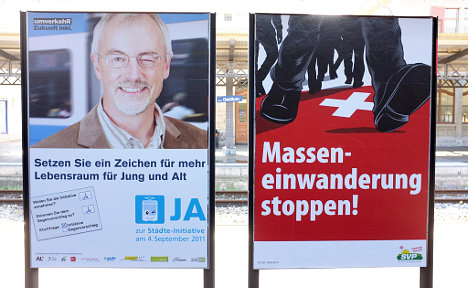 The SVP was behind the controversial referendum to limit immigration. Photo: Mike Knell

The study commissioned by two Sunday papers – Le Matin Dimanche and the SonntagsZeitung – found 23.8 percent support for the SVP with less than a year to go until the next parliamentary elections.

In the last federal elections in 2011 the populist party garnered 26.6 percent of the vote.

The party appeared to have strengthened its position this year, following the success of the referendum to curb mass immigration, which it spearheaded.

The Social Democratic Party (SP), the second most popular party, saw its share of the vote rise one percent to 19.8 percent in the Institut Léger Schweiz survey.

Two centrist parties, the Liberals (FDP) and the Christian Democrats (CVP), made small gains to stand at 15.7 percent and 12.4 percent respectively.

While support for the Greens slipped slightly, to 8.2 percent, two small centrist groups made a big jump.

The Green Liberals and Conservative Democrats increased their share of the vote to 7.4 percent and 7.2 percent respectively from 5.4 percent in 2011.

The survey also asked voters for their opinion on whether the different members of the federal government should play an important role.

Support for the 2014 president, Didier Burkhalter, was the highest ever recorded in a political poll, at 87 percent, the papers said.

Burkhalter was followed by another cabinet member from western Switzerland, Alain Berset, ahead of Doris Leuthard, next year's president Simonetta Sommaruga and Eveline Widmer-Schlumpf.

Less than half of respondents were positive about the role played by ministers Johann Schneider-Ammann and Ueli Maurer, according to the papers.

POLITICS
What Britons in Europe need to know about the UK government’s ‘votes for life’ pledge
Url copied to clipboard!