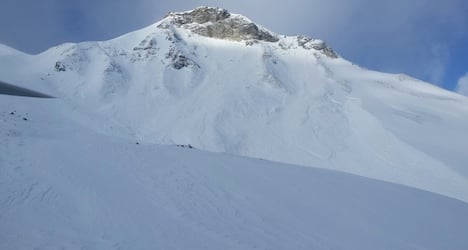 The Ramosch area, where two German skiers were injured by an avalanche. Photo: Graubünden cantonal police

The Swiss victim was skiing in the Saint Luc/Chandolin region on Sunday, Valais cantonal police said.

The man, originally from the canton of Fribourg, left patrolled ski runs and headed into an off-piste area around 4.40pm, when an avalanche swept him down the side of the mountain, cantonal police said.

The skier was carrying an avalanche beacon, which allowed searchers to retrieve him from a layer of snow 1.7 metres deep, police said.

He was transported by helicopter to hospital where he died from his injuries.

Three Air Glaciers helicopters and a dog searching team responded to the accident.

Valais police issued a warning of caution to people skiing in the canton, noting that avalanches remained a risk across the mountain region.

Meanwhile, earlier Sunday in the canton of Graubünden, two German backcountry skiers were injured, one of them seriously, after being being hit by another avalanche near the Heidelberg Hut in the Ramosch area.

The two victims were part of a group of nine skiers from Germany who were skiing at an altitude of around 2,500 metres when an avalanche swept down above them in the morning, cantonal police said.

Colleagues managed to free them from the snow but a 41-year-old man suffered serious injuries and was transported to a hospital in Zams, Austria, police said.

The other victim, a 50-year-old, was flown to a hospital in Scuol for treatment of minor injuries.

The ski group was spending a ski week at the Heidelburg Hut, which is run by the German Alpine Club.