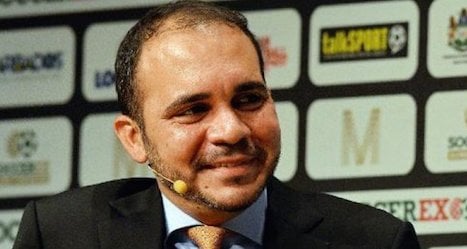 "I am seeking the presidency of Fifa because I believe it is time to shift the focus away from administrative controversy and back to sport," Prince Ali said on his official Twitter feed.

"This wasn't an easy decision," he said.

"It came after careful consideration and many discussions with respected FIFA colleagues over the last few months."

Fifa has been embroiled in controversy over the awarding of Qatar and Russia World Cup tournaments.

Last month, Fifa's top corruption investigator Michael Garcia, a US lawyer, quit over the handling of his inquiry into the bids.

And Blatter has come under fire from some quarters for seeking a fifth mandate as president, a position he has held since 1998.

But the Swiss has managed to ride out the storm with support from many of the organization's representatives.

"The world’s game deserves a world-class governing body — a service organization and a model of ethics, transparency and good governance," Prince Ali said.

The election for Fifa's president is set for May 29th in Zurich.

Candidates have until January 29th to declare themselves.

Jérôme Champagne, Fifa's former deputy secretary-general and diplomat, earlier announced he was throwing his hat in the ring.