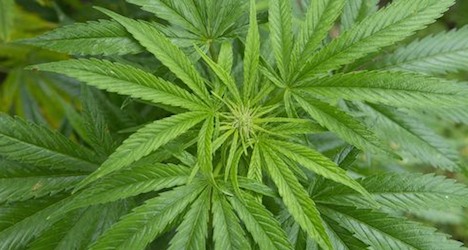 Authorities are considering a radical liberalization of drug laws in the Swiss canton in a bid to undermine the black market in cannabis.

Swiss children and teenagers top the European table for experimenting with the drug, according to a 2013 Unicef report that found that the more liberal a country's drug laws, the less likely its children were to try marijuana.

"We are agreed about going forward with this. Repression has failed as a policy," Geneva's Health Minister Mauro Poggia told Swiss newspaper Le Temps.

"But that does not stop us thinking about going down other avenues."

Geneva's cross-party Advisory Commission on Addiction urged the government to seek approval for the reforms from federal health authorities.

It called for a trial legalization to be rolled in the coming months.

But the right-wing Swiss People's Party (UDC) — the largest in the federal parliament — have vowed to resist any relaxing of the marijuana ban.

While a spokeswoman for Switzerland's Federal Office of Public Health didn't say if it would sign off on the proposal, she noted they are looking at "new ways to tackle the issue".

Since October 2013 anyone caught with under 10 grams of cannabis faces an on-the-spot fine of 100 francs ($99), rather than a criminal record.

By taking this approach one step further and creating a regulated, legal marketplace, Geneva's local government hopes to stem the illicit sale of marijuana, the commission's report said.

According to Swiss media, the commission recommends adopting a model similar to the one in Spain where growing cannabis for personal use is tolerated.

Dozens of private marijuana smoking clubs operate across Spain that serve cannabis users who do not want to buy from the streets.

However, the social club model would run counter to Swiss drug law, which states "all consumption of cannabis is punishable, except if it is necessary for a medical use or for the development of a medicine," said Catherine Cossy, a spokeswoman for Switzerland's Federal Office of Public Health.

"We have noted, however, that the current situation for the regulation of cannabis is generally perceived as unsatisfactory, especially in the cities, and we are looking therefore at new ways to tackle this issue," Cossy added.

Cannabis laws and punishments vary greatly between Swiss cities and some such as Zurich, Basel, Winterthour and Biel/Bienne are following closely what happens in Geneva.

Opposition parties in Geneva remain firmly opposed to any plans to relax drug laws, especially politicians from the right-wing UDC.

"We are against the legalization and the consumption of drugs, whether they are hard or soft," vice president Claude-Alain Voiblet said.

He said it was "totally absurd" that the country's cigarette laws could become more restrictive than those governing marijuana.

"We are opposed to the principle of these practices (drug use) and we will see if we will act in parliament with a petition or a bill," Voiblet said.

The UDC pushed through a motion last month in Bern's cantonal legislature which bans pilot programmes testing the legalization of marijuana.