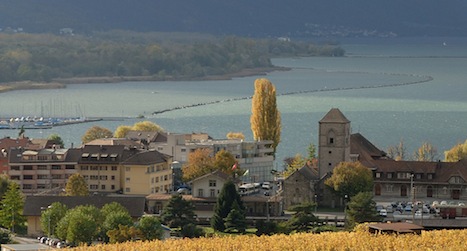 View of Villeneuve from nearby vineyard. Photo: Lepetit-CH/Wikimedia Commons

Neighbours called emergency services on November 5th 2014 after finding the victim lying on the ground in front of his villa, where he lived alone in Villeneuve, police said.

By the time medical staff arrived on the scene the man was dead.

Police said following an investigation they arrested the victim’s 49-year-old daughter and her 20 year-old son on December 16th.

The two suspects, who live in the region, have admitted to their involvement in the elderly man’s death, police said.

At the request of a prosecutor a court agreed to the provisional detention of the pair in jail.

An investigation continues into the exact circumstances of the man’s death.