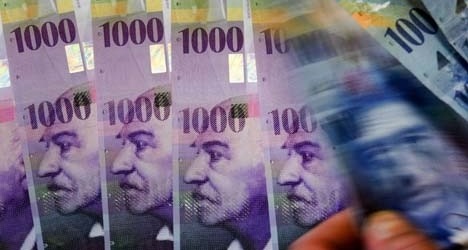 Christoph Blocher, a figurehead for the right-wing Swiss People’s Party, said he couldn’t say whether the central bank’s decision was the right one.

But “what happened today on the financial and currency market is a shock,” Blocher told the SDA news agency, referring to the sharp drop in the stock market and the equally sharp rise in the value of the franc against the euro and US dollar.

He said it was clear that removing the cap — which the industrialist supported when it was introduced in 2011 — would have become more difficult the longer the SNB waited.

However, the consequences of the decision now are that “unemployment will increase and poorly organized companies will possibly even disappear,” Blocher said.

Some right-wing and centre-right politicians were supportive of the central bank’s decision, pointing out that the weakness of the eurozone was putting it in an untenable situation, having to make massive euro purchases to maintain its minimum value of 1.20.

They also believe the decision showed that the SNB can now lead an “independent” monetary policy with a floating exchange rate.

Thomas Jordan, central bank president, told a press conference the decision on the franc was “bound to take the markets by surprise” but the bank’s management had become convinced that maintaining the euro price floor was “unsustainable”.

The bank decided to cut its reference interest rate to minus 0.75 percent to make the franc less attractive to investors and currency traders.

Jordan said the negative rates would not affect small savers because “banks need to offer attractive conditions on customer deposits”.

Economy Minister Johann Schneider-Ammann told media he was surprised about the central bank’s decision, saying he was only informed about it shortly before it was made public on Thursday morning.

The Liberal party member said he was confident Swiss companies could adapt to the new environment, though he also urged people to wait and see how the euro exchange rate will settle.

But he added that now it was even more important to ensure bilateral agreements with the European Union are reached and to push for corporate tax reform to offer companies an attractive tax jurisdiction.

Schneider-Ammann said it was too early to talk about an economic stimulus package to help companies that may be adversely affected by the high franc.

Many left-wing politicians, echoing the concerns of unions and export industries, were worried about the consequences a higher franc will have on industry and jobs.

The Socialist party issued a statement calling the SNB’s decision to allow the franc to appreciate a “high-risk, incomprehensible decision” that puts tens of thousands of job at risk.

“There are two poisons for our economy, a currency too strong and perpetual fluctuations,” Christophe Darbellay, president of the Christian Democrats, is quoted as saying by Le Temps newspaper.

The politician from the canton of Valais said he was particularly worried for the tourism industry, which is already coping with a lack of snow, the crisis of the rouble which is keeping Russian visitors away and the consequences of poor summer weather last year.

Representatives of export industries said the elimination of a floor for the euro-franc exchange opened the floodgates to currency speculators.

Swissmechanic, a group of small and medium sized machine companies, said the rise in the value of the franc to almost parity with the euro was catastrophic.

The group urged the SNB to reconsider its decision.

Nick Hayek, head of the Swatch Group, said the impact of the bank’s decision was like a “tsunami . . . as much for the export industry as for tourism, but also for all of Switzerland.”