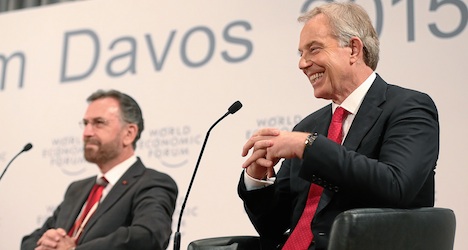 In a wide-ranging debate that took in conflicts in the Middle East, Nigeria, Central African Republic as well as the recent Paris attacks, the panel all agreed on one unfortunate fact: there's nothing new under the sun.

"Extremism is nothing new. We had extremism in the 20th century through Communism, through Fascism, both of which were ideologies that were profoundly anti-religion," said Blair, a committed Christian, who is now a Middle East peace envoy.

"It's not religion per se that were causes of conflict," the former Labour politician said.

However, today, the ideology that is most threatening our security is an ideology based on a perversion of religion," added Blair, referring to radical Islam.

Hamza Yusuf Hanson, a top Islamic scholar, agreed that radical Islam was what he called a "perversion", arguing that traditional Islam was "one of the exceptional religious movements that allowed other religions to live peacefully among them."

And Rabbi David Rosen, from the American Jewish Committee, said religion was being skewed to manipulate people, in a downward spiral that leads inevitably to violence.

"When we feel threatened, it's natural and desirable to turn to religion," he said.

Religion then morphs into a siege mentality as people define themselves not just as belonging to the same religion but also against all others, Rosen explained.

This then leads to a them-against-us mentality as "people actually believe that they are doing what God wants," he said.

What does 'I am Charlie' mean?

The religious leaders also found common ground when discussing the limits of freedom of expression in the wake of the Charlie Hebdo killings in Paris earlier this month.

Two Islamist gunmen killed 12 people in and around the offices of the French satirical magazine, claiming "revenge" for the publication of cartoons of the prophet Mohammed, which most Muslims find blasphemous.

After the shooting, Charlie Hebdo again published a cartoon featuring Mohammed, which sparked anger and riots in many Muslim countries, some turning deadly.

The publication of the cartoons was an "absolute lack of civility and common decency," he said.

Noting that the three gunmen that eventually killed 17 people over three days in France were radicalized there, he said: "You can condemn and criticize religion . . . all those things are fine but you can't mock and disrespect people."

"Radicalization is very easy when you mock what people hold dear."

He urged politicians to go beyond "buzzwords" and stop "throwing sentences together" and deal with the root causes of radicalization, especially in France.

Meanwhile, Rosen told AFP that insulting people's religion was in many ways worse than insulting them racially.

"I think it's very interesting that President Francois Hollande said that those burning the French flag (in recent anti-Charlie Hebdo protests) should be punished, so he does acknowledge there are limits to freedom of expression," he said in an interview.

"I think people need to be more responsible."

How then to resolve the problem of religion being perverted into violence?

Blair argued that the only long-term solution was education.

"This extremism is not natural, it's taught and its learned and you have to un-teach it in the school systems," he said.

Meanwhile, Archbishop Makgoba said that "as a man of faith, I cannot give up hope" and urged the assembled elites to keep the problem of violence and religion in perspective.

"Of the six billion people in the world, only a handful are terrorists, so let us not be terrified by this tiny minority," he said.

"Freedom and love are key values and if we stick to that, we can transcend violence."