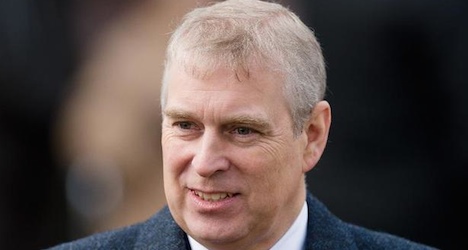 It is the first time the prince has appeared in public since the allegations surfaced late last month, when Buckingham Palace was forced to issue an unprecedented public denial.

"I wish to reiterate and reaffirm the statements already made on my behalf by Buckingham Palace," he said.

Andrew, the Duke of York, was greeted with a barrage of cameras as he arrived in the glitzy Alpine resort where the world's rich and powerful are gathering.

About 200 people were expected at his [email protected] reception in the Belvedere Hotel later Thursday — an event aimed at showcasing British digital talent.

Andrew owns a chalet near Davos and often attends the forum, usually passing largely unnoticed among the assorted global elites headlining the talks at the World Economic Forum.

The woman at the centre of the scandals says billionaire financier Jeffrey Epstein, a former friend of the duke, forced her into sexual relations with Andrew when she was 17.

Her lawyers said in a letter released on Wednesday they want Queen Elizabeth II's second son to respond under oath to the allegations.

The lawyers asked that Prince Andrew be interviewed "regarding interactions that you had with Jane Doe #3 beginning in approximately early 2001".

The request states the interview should last about two hours and includes a photograph of the prince with his arm around the woman.

The law office of Bradley Edwards, who represents the woman, told AFP it had no additional comment.

According to the motion filed in a Florida court this week, the woman alleges she was "forced to have sexual relations" with 54-year-old Andrew, meeting him in London, New York and the Caribbean at Epstein's behest.

She claims Epstein had kept her as a "sex slave."

Epstein was convicted in 2008 of soliciting an underage girl for prostitution and served a prison term.

Buckingham Palace has repeatedly and strongly denied the allegations against Andrew, calling them "false and without foundation."

Andrew was on a ski holiday in Verbier, the mountain resort in the canton of Valais, when the allegations first surfaced.