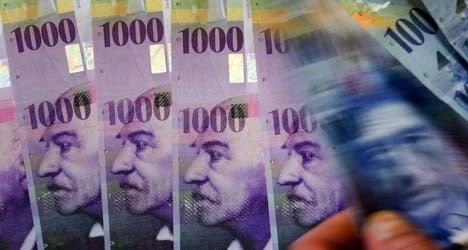 In a shock move a week ago, the Swiss National Bank scrapped a three-year-effort to keep down the value of the franc, sending the Swiss currency soaring by as much as 30 percent.

But the central bank has ardently defended the move, insisting its efforts to enforce the ceiling, including purchasing massive amounts of foreign currency, were no longer sustainable.

"In the days running up to the decision to abolish the ceiling the sum ploughed in was increasing," Fritz Zurbruegg, a member of the Swiss National Bank's governing board, told the Blick daily.

If the bank had continued its efforts, "we would have spent about 100 billion francs (100 billion euros, $116 billion) for January alone," said Zurbruegg, the number three in the bank.

"We came to the conclusion that the best option was to free up the exchange rate," he added.

The SNB had been defending the exchange rate since September 2011 in an effort to protect the country's vital export and tourism industries.

The franc has stabilized around parity with the euro, a strengthening of some 17 percent from the previous limit of 1.20 francs to the euro, while it has risen to $1.17 against the US dollar.

The rate was introduced as the eurozone crisis sent investors scurrying to the safe haven currency.

The bank's decision to allow the franc to float has generated widespread criticism, but Zurbruegg insisted that the bank's "credibility" was intact.

"We have had no sign of a deflationary spiral," he said.

Swiss businesses, which have seen their shares take a bashing since the decision, are not convinced.

The banking lobby has for instance warned that the strong franc could pose a problem for private banks which earn up to 80 percent of their revenue in foreign currencies with higher cost-income ratios.

Switzerland's iconic watch industry, which exports nearly 95 percent of its top-end products to markets where revenues are earned in dollars and euros, has also said the move will take a harsh toll on sales and margins.