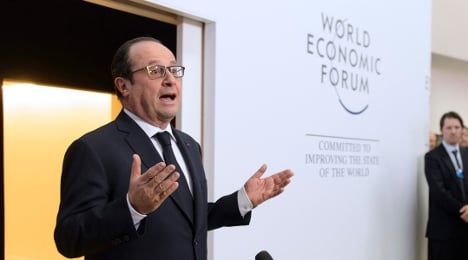 "There will be no prosperity without security," he said.

Hollande demanded big business take on their “responsibilities” and join the fight against terrorism after he arrived in Davos on Friday.

Speaking two weeks after his country was rocked by terrorist attacks, the French president told reporters: “I will tell big corporates, including financial ones, that they must live up to their responsibilities."

He added that companies “must fight all kinds of trafficking, against tax havens and against illegal financial flows — this is to be up to the task of fighting terrorism.”

Later, in his speech to the conference, Hollande said: "There will be no prosperity without security . . . we only have one goal: security, development but also to save and protect the planet to pass it on. "

Hollande also turned his attention to the European Central Bank’s massive bond massive bond-buying programme, maintaining  it should not be used as an excuse for eurozone countries not enacting far-reaching reforms.

"It would be too simple to say, given that the ECB has released liquidity to stimulate growth, that we have nothing left to do," Hollande said.

"With respect for its (ECB's) independence, I can only welcome its decisions," Hollande told the media.

He said the ECB was fulfilling its role when it "fights against unemployment" and makes "growth a priority".

"We must speed up (reforms) … this is what France will do," he said.