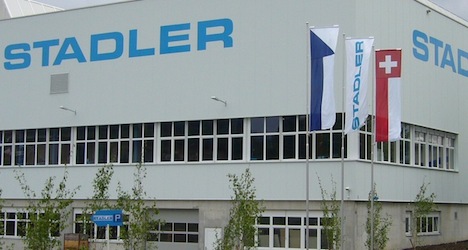 The proposal is just one way Swiss companies, particularly those in the exporting business, are responding to the high franc.

Employees would be ready to accept a long work week without extra pay “if it is a temporary measure,” Spuhler told the SonntagsZeitung newspaper.

But the Stadler Rail boss said it would be a mistake to cut wages because now is not the time to reduce the purchasing power of Swiss workers.

Spuhler noted his company had already made cost-saving measures to adjust from several years ago when the euro was worth more than 1.50 francs.

“Most companies have thought in the last few days about a hiring freeze and many have already imposed it,” Hans Hess, president of industrial group Swissmem, told SonntagsZeitung.

Swissmem is an association representing engineering, electrical and metal companies that employ 330,000 people and whose products accounted for almost a third of Swiss exports in 2013 with a value of 65 billion francs.

Under such arrangements, the employment offices subsidize pay.

Business groups are calling for a relaxation of conditions to allow such deals on a temporary basis.

Other business leaders are asking the Swiss government to cut taxes and reduce government bureaucracy.

Hans Grunder, a Conservative Democratic Party member from the canton of Bern, is advocating the abolition of sales tax on tourism services and restaurant food for a year.

“The situation is very dramatic,” Grunde told the Schweiz am Sonntag newspaper.

“Swiss tourism and gastronomy has in one fell swoop become twice as expensive as abroad.”

Grunder said such a tax holiday would cost the government 800 million francs a year but it would send a “huge signal” to tourists.