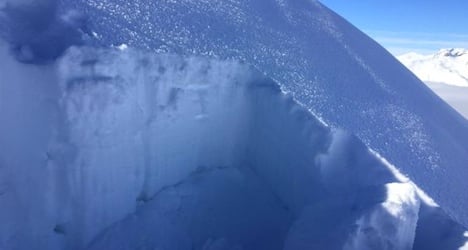 Picture shows how slabs of snow can break off layers of weak snowpack. Photo: J. Appel/WLS

Since the winter of 2004-05 a total of 248 deaths have been registered in connection with snow slides in the Swiss mountains, the WSL Institute for Snow and Avalanche Research said.

The issue avalanche safety has come into sharp focus this past week with 12 people falling victim to snow slides in a five-day period, including eight on Saturday alone.

The latest accident occurred on Monday in the canton of Graubünden when an avalanche buried a 51-year-old skier above Disentis in the Val Segnas area of the Alps.

A group of “freeriders” in the area attempted to dig him out but he was dead by the time he was found, cantonal police said.

The 2014-2015 winter season is en route to being one of the most deadly on record with 20 fatalities already registered.

On average, 22 people die in Swiss avalanches annually and 107 perish across Europe’s mountains.

More than half of the deadly accidents in Switzerland occur on the north side of mountains, where the most back-country skiers go, the WLS institute said.

Experts for the past week have highlighted the dangers of avalanches throughout the Swiss Alps and in parts of the Jura Mountains following heavy snowfall in the regions.

Between 60 and 130 centimetres of fresh snow fell on a fragile base leading to instability in some areas.

Back country skiers are tempted into risky areas by the promise of cruising in fresh, untouched powder.