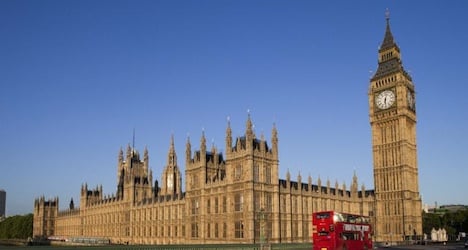 Prime Minister David Cameron's Conservatives appointed former HSBC chief executive Stephen Green to the House of Lords in 2011, where he served as a trade minister, a year after it received files leaked from the bank that raise questions about its role in aiding tax evasion.

The Labour party questioned Green's fitness to serve as a trade minister, a position he held until 2013.

"Either he didn't know (about the activities at the Swiss bank) and he was asleep at the wheel, or he did know and he was therefore involved in dodgy tax practices," Margaret Hodge, opposition Labour MP and chairman of the public accounts committee, is quoted as saying on Monday by The Guardian online.

Green, HSBC's chief executive from 2003 before becoming chairman in 2006, declined to comment on the claims when questioned by the BBC on Monday.

But the Labour party, hoping to take power after May's general election, faced allegations that it had not clamped down on tax dodging when it was in government until 2010.

This covers the period when HSBC's Swiss private bank is accused of helping clients evade taxes on accounts containing $119 billion.

Labour argues that it did not have the information because the leaked data was only released in 2010.

The row highlights the complex task both parties face in casting their relationship with big business ahead of the May 7th general election, in which opinion polls suggest they are virtually neck-and-neck.

Cameron's centre-right Conservatives are traditionally seen as more in tune with big business but were labelled "the party of Mayfair hedge funds and Monaco tax avoiders" by Labour last week over a tax loophole for hedge funds, and the fact that hedge funds are a major financial backer of the Tories.

Meanwhile, centre-left Labour's policies have drawn criticism from several business leaders who say they could damage the economy and contrast leader Ed Miliband's rhetoric with the business-friendly Labour administration under Tony Blair from 1997.

"Once again the Tories have been exposed as unable and unwilling to take real action on tax avoidance — little wonder that under them the tax gap has risen year on year," shadow finance spokeswoman Cathy Jamieson said.

The government hit back at Labour, saying the party had failed to act.

"I do have to make the point that there was a lack of grip in this area and a lack of progress in dealing with tax cheats," junior finance minister David Gauke told BBC television.

He also denied that there was "any suggestion or any evidence" that Green was directly involved in the activities of HSBC's Swiss private bank.

The claims against HSBC arise from files obtained by the International Consortium of Investigative Journalists (ICIJ) — a network of investigative reporters —  via French newspaper Le Monde.