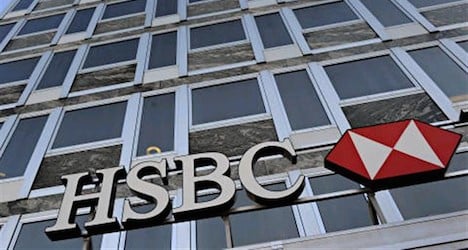 The files created global shockwaves, spotlighting the financial dealings of the world's ultra-rich and prompting British lawmakers to launch an inquiry into the London-based bank.

The cache of files made public in the so-called SwissLeaks case includes the names of celebrities, alleged arms dealers and politicians — though inclusion on the list does not necessarily imply wrongdoing.

Hervé Falciani, an IT worker turned whistleblower, stole the files in 2007 and passed them to French authorities, but they had not been previously made public.

The International Consortium of Investigative Journalists (ICIJ) obtained the files via French newspaper Le Monde and shared them with more than 45 other media organizations worldwide.

But Falciani said the media reports on the documents' contents were based on just a fraction of the files he gave to the French state.

"This is only the tip of the iceberg," the Franco-Italian told France's Le Parisien newspaper in an interview published Tuesday.

"There's more than what the journalists have. Several million transactions (between banks) are also in the documents I transmitted," Falciani said.

"These figures could give an idea of what lies at the bottom of the iceberg."

The files were used by the French government to track down tax evaders and shared with other states in 2010, leading to a series of prosecutions.

Dubbed the "Snowden of tax evasion" and "the man who terrifies the rich", Falciani remains wanted on data theft charges, but France and Spain have offered him protection by refusing to extradite him to Switzerland.

Margaret Hodge, chairwoman of the British parliament's Public Accounts Committee, told the BBC that lawmakers were launching an "urgent inquiry" and would order HSBC to give evidence if necessary.

The documents show that HSBC opened Swiss accounts for international criminals, businessmen, politicians and celebrities, according to the ICIJ.

The revelations renewed calls for a crackdown on sophisticated tax avoidance by the wealthy and multinational companies.

Tax avoidance is legal, but tax evasion is not.

HSBC's reputation has been tarnished in recent years by a string of high-profile controversies, including oversight failures which meant Mexican drug traffickers could launder money through its accounts.

Shares in the bank were down 1.64 percent at the close of trading in London on Monday.

A range of current and former politicians from Russia, India and various African countries, as well as Saudi, Bahraini, Jordanian and Moroccan royalty, and the late Australian press magnate Kerry Packer were named in the files.

Critics called for a Swiss probe against the bank, which is already facing prosecution in France and Belgium.

Switzerland has so far only launched an investigation against Falciani.

Franco Morra, the head of HSBC's Swiss unit, said the bank had closed the accounts of clients "who did not meet our high standards".

HSBC now has "strong compliance controls in place", he told AFP in an email, adding that the revelations are "a reminder that the old business model of Swiss private banking is no longer acceptable".

Notes in the leaked files indicate HSBC workers were aware of clients' intentions to keep money hidden from national authorities.

Of one Danish account holder, an employee wrote: "All contacts through one of her three daughters living in London. Account holder living in Denmark, i.e. critical as it is a criminal act having an account abroad non declared."

The files provide details on over 100,000 HSBC clients, including people targeted by US sanctions, such as Turkish businessman Selim Alguadis and Gennady Timchenko, an associate of Russian President Vladimir Putin.

Alguadis told the ICIJ it was prudent to keep savings offshore, while a spokesman for Timchenko said he was fully compliant with tax matters.

Other individuals named on the list include designer Diane von Furstenberg, who told the ICIJ the accounts were inherited from her parents, and model Elle Macpherson, whose lawyers told the ICIJ she was fully compliant with UK tax law.