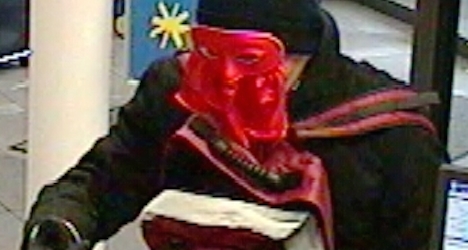 An unknown man wearing a red carnival mask robbed the branch in the town of Rothenburg at around 11am on Thursday, Lucerne cantonal police said.

He threatened an employee with a “dark gun” and demanded an undisclosed amount of cash before fleeing in an unknown direction, police said.

He was wearing a dark jacket, black woolen hat and the mask, while he was carrying a red and white backpack.

Police said he spoke German with a foreign accent.

Investigators have distributed photos of the suspect taken from a video surveillance camera and are seeking witnesses in the case.

Rothenburg, a predominantly catholic town, is one of dozens communities that launched its annual carnival on the Thursday before Ash Wednesday with costumed parades and other “Fasnacht” festivities that run until Ash Wednesday (February 18th).