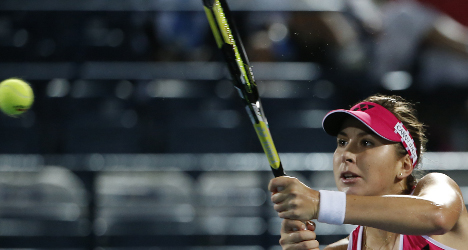 The 34-year-old holder of seven Grand Slam titles outplayed Bencic, a 17-year-old earmarked by some as the tour's most promising new player, for the loss of just three games in only an hour and nine minutes, making her the first player into the third round.

Bencic, the winner of both the Wimbledon and French open junior titles and last year's WTA Tour newcomer of the year after rising 179 places to number 33, frequently hit the ball very hard and sometimes brilliantly.

But Williams' fitness levels and playing standard are higher than for many a year.

She was superb off the ground on both wings, and her 28 winners made up for inconsistencies in her serving.

Part of this return to form has been due to patient and well thought out long term plans to recover from chronic illness, but part right now may be coming from her liking for the Dubai atmosphere and conditions.

It was her 16th consecutive win in the Emirate, a sequence which takes in three titles here and dates back to 2005. It suggests a fourth triumph is a distinct possibility, despite a seeding of only eight.

"I'm pleased to have been able to get into a position to win some matches" said Venus, who has won ten out of 11 this year so far. "Once you win some it helps you to have that momentum.

"My strategy is a lot better than five or six years ago, and now I have a backhand slice and actually start to use it, even when I'm not playing better."

Despite the brevity of the match Bencic, who is a compatriot and protégé of Martina Hingis, had a very good future, she thought.

"And I hope so for the good of Swiss tennis," said Williams.

Coincidentally Hingis is here, having returned after an interval of eight years to compete in Dubai again.

The 34-year-old, who spent 209 weeks as world number one and captured five Grand Slam singles titles, won the title at the pioneering women's Dubai Open in 2001.

Now Hingis will be trying to win the doubles with Flavia Pennetta, the Italian with whom she reached the final of the US Open in September.