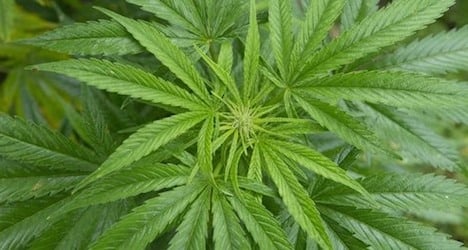 Police found and dismantled the plantation after a shootout on Sunday night in which two Swiss men allegedly shot and injured two others, one of which remains in a critical condition.

The plantation, which contained several thousand cannabis plants, was believed to be a professional operation, reports news agency ATS, one of an increasing number in Switzerland.

Last year St Gallen police uncovered some 70 plantations in the canton, against just 17 in 2013.

Earlier this month Zurich police found a plantation of 10,000 plants at Bülach.

The Altstätten shooting illustrates an increasing problem in the country as cannabis growers attempt to protect their illegal plantations from rival gangs eager to capitalize on a lucrative market for the drug.

Indoor plantations are often protected with video surveillance, alarm systems and private security staff, according to a report in newspaper 20 Minuten.

At Altstätten, the building was guarded by people with dogs, neighbours told the paper.

The security measures aim to guard against attacks from rival gangs, often foreign, who keep watch until the harvest is ripe, said 20 Minuten.

Switzerland is an “eldorado” for cannabis sellers, as one gram of marijuana goes for between eight and ten francs, Eugen Rentsch, director of St Gallen police’s narcotics department told newspaper Blick.

The indoor plantations are mostly established by Swiss who know the local market, so the spoils of a raid by a foreign gang would be considerable.

A haul of 14,000 hemp plants represents 14 million francs, according to the Newsnet report.

The number of cannabis users in Switzerland is estimated at between 50,000 and 100,000, according to Frank Zobel of Addiction Switzerland.

The cultivation and trade of cannabis in Switzerland is illegal, as is its consumption, however since October 2013 the possession of less than 10 grams of cannabis is considered a minor offence and incurs only a spot fine.

Last year a proposal was put forward to create ‘social clubs’ where cannabis could be legally consumed.

In January this year authorities in Geneva proposed a trial legalization of the drug in an effort to undermine the black market.