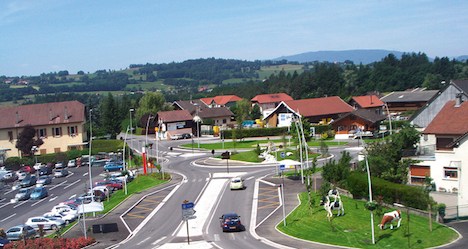 The two armed suspects, held the guard, his wife, their son and the man’s mother-in-law captive in their apartment in Viuz-en-Sallaz, a municipality in the French region of Haute-Savoie, near the Swiss border, according to media reports.

The drama began on Monday night when the pair entered the apartment and held the family hostage until Tuesday morning, threatening them in a bid to gain access to money at the currency exchange outlet in Geneva, Le Messager, a local French newspaper reported.

The hostage takers, branded as "homejackers", ordered the guard to take cash from the FX outlet and give it to an accomplice, while they held the rest of the family at gunpoint.

But en route to his workplace the guard managed to alert police, which triggered the deployment of officers from Geneva, neighbouring Annemasse in France and the local French gendarmerie, Le Messager reported.

The 20 Minutes newspaper reported policemen with machine guns were posted on Tuesday morning outside the Léman currency exchange in downtown Geneva.

The suspects, once they realized that their plan was not working, left the family without causing any harm.

As of Tuesday night the pair were still being sought by police.