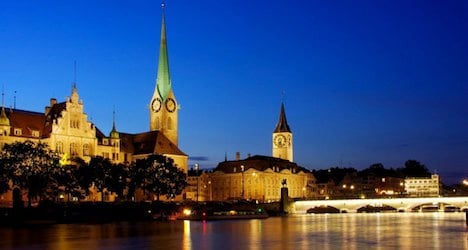 Zurich by night: costly but high quality of life, too. Photo: Switzerland Tourism

With the recent rise in the value of the Swiss franc Switzerland's largest urban centres have become the world’s most expensive cities, according to data from the Economist Intelligence Unit (EIU).

The corporate sibling of The Economist magazine this week unveiled its list of the planet’s most expensive cities that included the Swiss cities but put Singapore at the top, followed by Paris and Oslo.

But this was based on cost of living data collected in 2014 before the Swiss National Bank decided in January to abandon a policy that kept the franc pegged to the euro for more than three years.

The franc has subsequently surged in value against the euro and the American dollar, and rebasing the survey on current exchange rates would put the Swiss cities at the top, the EIU acknowledged in a tweet.

The unit surveys the cost of living in 130 cities across the world every two years.

It compares prices across 160 categories, including food, rent and recreational costs.

The survey ranked Bangalore, Karachi and Mumbai as the three cheapest places in the world to live.

While Zurich is an expensive place to live, there are compensations: in another survey, released on Wednesday, Switzerland's largest city came second in a global quality of life ranking.

It ranked just behind Vienna in the list compiled by HR consultants Mercer, while Geneva came eighth.

The quality of living survey is conducted annually to help employers understand factors that impact their employees.

Meanwhile, for a graphic indication of how much going on a date costs in Geneva compared to other major capitals, including London and Paris, check out this blog from Time Out London.