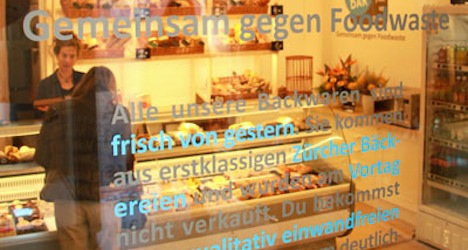 The ÄSS Bar touts its products as “fresh from yesterday”, offering customers bargain prices while fighting against food waste.

With three shops in Zurich and one in Bern, ÄSS Bar collects from various bakeries baked goods and pastries that would otherwise be thrown out.

“By buying our pastries you help against food waste in our region and can also go easy on your wallet at the same time,” the company says on its website.

At the newest outlet in the centre of Bern, croissants, cream cakes and sandwiches are on display along with a range of other breads and pastries.

The array of goods for sale changes every day because it depends on what the bakeries have left.

The shop’s concept is apparently striking a chord with customers.

One third of Swiss food ends up in the waste bin instead of on customer plates.

Such products as spinach pie, cottage cheese wraps and multigrain bread sell for half the normal retail price at the ÄSS Bar shops.

The first outlet launched a year ago in Zurich and has sold about 40 tons of baked goods that would have otherwise discarded, 20 Minuten said.

For more information about the shops and their locations, check the ÄSS Bar website.