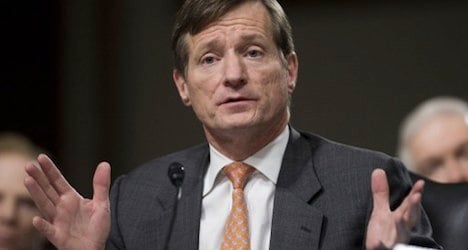 Dougan stepping aside after eight years at the helm. Photo: AFP

During his eight-year term Dougan steered the bank through the financial crisis and through a tax evasion probe by the US Justice Department that eventually saw the Swiss banking giant slapped with a $2.8 billion fine.

The 55-year-old American joined Credit Suisse First Boston in 1990, heading the equities business and, following the merger with Credit Suisse in 2005, was appointed to the top job two years later.

Now, his departure is being described in a reports as an ouster as Switzerland's second largest bank continues to reel from massive US penalties and faces increasing regulatory scrutiny.

Thiam, 52, has been Prudential's chief executive since 2009 and oversaw the firm's rapid expansion into Asia.

Under his leadership, however, the group failed in its $35.5-billion takeover bid for AIA — the Asian arm of US insurance giant AIG — in early 2010.

A dual French-Ivory Coast national, he was born in the African country but grew up in France, where he attended some of the country's most prestigious schools, including Ecole Polytéchnique, before joining the McKinsey consulting firm.

He worked for the government of Ivory Coast and for the Aviva insurance company before joining Prudential in 2008 as chief financial officer, becoming chief executive the following year.

"It has been a privilege and a pleasure to lead one of the iconic companies in UK financial services," Thiam said in the statement released by Prudential in London.

"We have successfully navigated some challenging times, including the global financial crisis, and have emerged with four profitable and strongly cash-generative businesses.

"Prudential in Asia has more than doubled in size and profitability since 2009 and is a clear leader in insurance in the world's most populous and dynamic region."

Thiam will become the first black to head a global bank.

“We are extremely grateful to Brady Dougan for his exceptional commitment, unparalleled personal contribution and leadership to Credit Suisse over many years," Urs Rohner, Credit Suisse chairman said in a statement.

"Brady has significantly and successfully shaped our company; he has kept our bank on track in recent years despite a complex environment and considerable headwinds in the global financial services industry," Rohner said.

"Brady and his management team have mastered even the most difficult challenges together.”

Dougan said in a statement issued by the bank that it was the right time to go.

"Now is the right time for the organization and for me to transition out of the CEO role," he said.

"Tidjane and I have worked together over the past six years, and I have tremendous respect for him."

"They are probably rejoicing in the departure of Brady Dougan rather than the identity of the new CEO," said IG Bank analyst Laurent Bakhtiari, who described Dougan's departure as "only half of a surprise".

Dougan has faced a rising tide of criticism in recent years for not reforming Credit Suisse fast enough and especially after the bank was slapped
with its staggering US fine last year.

"The real surprise is the identity of the new CEO," Bakhtiari said in a note.

Thiam has no banking experience, and the analyst said his career path was "absolutely not linear".

But Rohner highlighted Thiam's "extensive international experience, including in wealth and asset management and in the successful development of new markets," which he insisted would provide "a firm foundation for leading Credit Suisse".

But Switzerland's number two bank maintained that just one senior leader, who has since been forced out, was entirely to blame for both incidents and that rest of the top brass had not been aware of the activities.

Releasing the investigation conducted by the Homburger law firm, Credit Suisse said that “it has been confirmed that Peter Goerke, who was a Member of the Executive Board at the time, was placed under observation by a third-party firm on behalf of Credit Suisse for a period of several days in February 2019.”

The probe was launched following media reports last week that spying at Credit Suisse ran deeper than one case.

The banking giant was shaken by the discovery last September that surveillance had been ordered on star banker and former wealth management chief Iqbal Khan.

Kahn was tailed after he jumped ship to competitor UBS, sparking fears he was preparing to poach employees and clients.

That revelation came after Khan confronted the private investigators tailing him, leading to a fight in the heart of Zurich. Khan pressed charges.

The probe results released Monday echoed those findings, concluding that Bouee “issued the mandate to have Peter Goerke put under observation.”

“As was the case with Iqbal Khan, this observation was carried out via an intermediary,” it said, stressing that Bouee “did not respond truthfully” during the initial investigation “when asked about any additional observations and did not disclose the observation of Peter Goerke.”

The new investigation also did not find indications that Thiam or others in the board or management “had any knowledge of the observation of Peter Goerke until media reported on it,” the statement said.

“The Board of Directors considers the observation of Peter Goerke to be unacceptable and completely inappropriate” it said, adding that it had issued an apology to Goerke.

It added that “safeguards” were already in place to avoid future similar misconduct. Switzerland's market watchdog FINMA meanwhile said last week that it was “appointing an independent auditor to investigate Credit Suisse in the context of observation activities.”

“This investigator will clarify the relevant corporate governance questions, particularly in relation to the observation activities,” a statement said Friday.