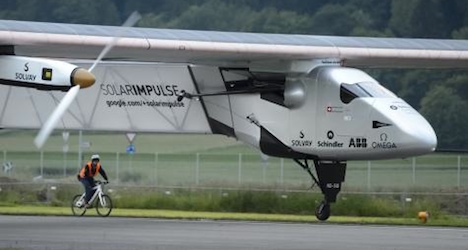 By the time it arrived in Ahmedabad, in western India on Tuesday, the plane had flown 1,468 kilometres (912 miles), the flight's organizers said.

Solar Impulse project chairman and co-pilot Bertrand Piccard was at the controls.

The plane's backers say it was the longest point-to-point distance flown by a solar-powered plane, but the record must be confirmed by air sports
governing body Federation Aeronautique International.

Solar Impulse's CEO and co-founder André Borschberg set the previous record in Solar Impulse 1 when he flew 1,386 kilometres across the United States.

The aircraft touched down Tuesday in the western state of Gujarat at 11:25 pm local time (1755 GMT) to finish its trip from the Omani capital Muscat in little less than 16 hours.

The longest single leg of the planned circumnavigation will see one of the pilots fly solo non-stop for five days and nights across the Pacific from
Nanjing, China to Hawaii, a distance of 8,500 kilometres — again smashing the record.

In total the plane is to travel 35,000 kilometres and will cross two oceans.

The circumnavigation, which is to take place in 12 steps, requires 25 days worth of flight time spread over five months.

The team hope to promote green energy with their round-the-world attempt, which was ridiculed by the aviation industry when it was first unveiled.