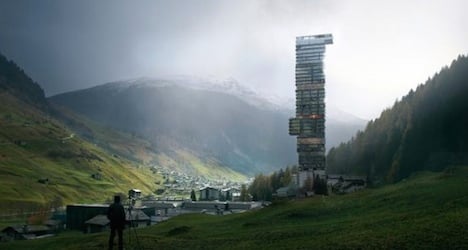 Mayne has acknowledged on his Facebook page that his Los Angeles-based firm’s design has been selected, following a competition involving eight short-listed firms.

However, the project will not be officially presented until March 25th in Zurich.

But already doubts have sprung up about the feasibility of the project and whether it will get the necessary approvals.

According to Schweiz am Sonntag, the hotel would be just 16 metres wide and 30 metres long, and would be located not far from the Therme Vals spa, itself designed by Swiss architect Peter Zumthor, another Pritzker Prize winner.

The spa, featuring slabs of local granite and a grass roof, was built in 1996 over the only thermal springs in the canton of Graubünden, in the eastern part of Switzerland.

The critics have already lined up against the project to build a tower that would dwarf the current tallest building in Switzerland, Zurich’s Prime Tower (126 metres) and the Roche Tower under construction in Basel that will top out at 178 metres.

In general, “skyscrapers built in the Alps are an absurdity,” Vittorio Lampugnani, architecture professor at the Federal Institute of Technology (ETH) Zurich is quoted as saying by 20 Minuten newspaper.

In the Alpine landscape there is no need to accommodate so many people in such a confined space, Lampugnani, an Italin architect, said.

The project is earmarked for a rural village with a population of around 1,000, which in the early 1970s was one of the last municipalities in the country to be connected to the electrical grid, according to the online Historical Dictionary of Switzerland.

“I know we are reaching for the stars,” Truffer is quoted as saying by 20 Minuten.

“We want to build one of the five best hotels in the world.”

The hotel would target wealthy businessmen from Asia and the Middle East, prepared to pay anywhere from 1,000 francs to 25,000 francs a night.

The project will be subject to a vote of citizens in the village in the fall.