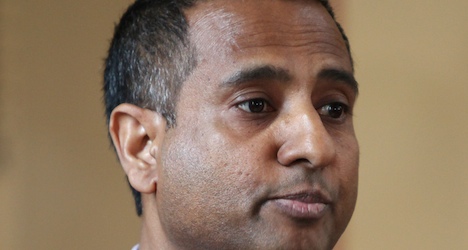 The UN special rapporteur on Iran, Ahmed Shaheed, hailed "some limited improvements" on the ground in Iran since the 2013 election of President Hassan Rouhani, but warned "the overall situation has worsened."

Speaking to reporters before presenting his latest report on the human rights situation in Iran to the UN Human Rights Council, Shaheed pointed to soaring numbers of executions and the jailing of journalists and activists in the Islamic country.

He also warned that new legislation under discussion risked deepening the problem of discrimination against women and minorities.

Iran's ambassador to the UN in Geneva Mohsen Naziri Asl slammed Shaheed's report as "politically motivated", telling the council that the UN expert was "ignoring the positive developments in my country."

Shaheed, meanwhile, pointed out in his report that at least 753 people, including 25 women and 13 minors, were executed in Iran last year alone, marking a 12-year-high.

Counting the 252 executions in the country since the beginning of this year, Iran has executed more than 1,000 people since January 2014, he said.

"Iran continues to execute more individuals per capita than any country in the world," Shaheed told reporters.

That is particularly alarming, he said, considering a majority of all executions in the country are for drug-related offences or other crimes, including adultery, sodomy, and "vaguely worded national security offences"
that do not meet international standards for when the death penalty is permissible.

Shaheed called on Tehran to "declare immediately a moratorium on executions."

The UN expert, a former foreign minister of the Maldives, also lamented that Iranian authorities "continue to harass, arrest, prosecute and imprison many members of society who express criticism of the government or publicly deviate from officially sanctioned narratives."

Iran is one of the countries in the world that imprisons most journalists, he said.

Journalists, as well as activists, lawyers and opposition politicians are often charged with breaching a range of national security laws, including on propaganda against the system, and offending government leaders, he said.

Many had hoped that the election of Rouhani, regarded as a moderate, would lead to improvements in the human rights situation in Iran.

But Shaheed said the deterioration he had seen may have come because "hardline" elements in the country "want to undermine the president's image as a reformist."

Shaheed's comments came as Iranian Foreign Minister Mohammad Javad Zarif met his US counterpart John Kerry in nearby Lausanne in a race to hammer out an elusive agreement on Tehran's nuclear programme.

"I warmly welcome these efforts, as I share a genuine hope for long-lasting peace and stability with those sitting at the negotiating table," Shaheed said.

But he noted that "there is concern among the Iranian civil society that the nuclear file may be casting a shadow over the human rights discussions."