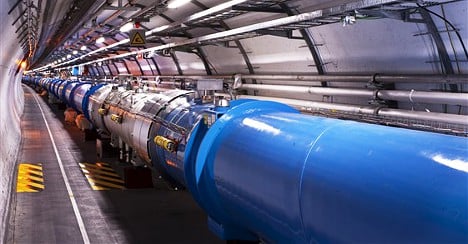 The European Organization for Nuclear Research (CERN) said two labs that were normally in friendly competition at the Large Hadron Collider (LHC) had joined forces for the first time in making the combined estimate.

Using different technologies, the Atlas and CMS labs found the elusive particle had a mass of 125.09 gigaelectronvolts (GeV), with a margin of error of 0.24 GeV either side.

The figure "corresponds to a measurement precision of better than 0.2 percent," CERN said in a press release.

The "Higgs" is a cornerstone of the Standard Model of particle physics, the theory that describes all known elementary particles and their interactions.

Believed to confer mass, the elementary particle was theorized in 1964, but confirming its existence took 48 years.

The exploit earned the 2013 Nobel Prize in physics for theoreticians Peter Higgs and Francois Englert.

The estimate of the mass was unveiled at a conference in La Thuile, northwestern Italy, CERN said.

"The Higgs Boson was discovered at the LHC in 2012 and the study of its properties has just begun," said Tiziano Camporesi, the spokesperson for the Compact Muon Solenoid (CMS) lab.

"By sharing efforts between Atlas and CMS, we are going to understand this fascinating particle in more detail and study its behaviour."

The LHC is gearing for a restart, by the end of May or early June, after a two-year upgrade.

The facility comprises a 27-kilometre (17-mile) ring-shaped tunnel, in which two beams of protons are sent in opposite directions.

Some of the protons smash together, creating sub-atomic rubble that may hold clues to novel particles, while other particles survive the collision and continue around the ring.

Atlas and CMS bring together more than 5,000 scientists from over 50 countries.