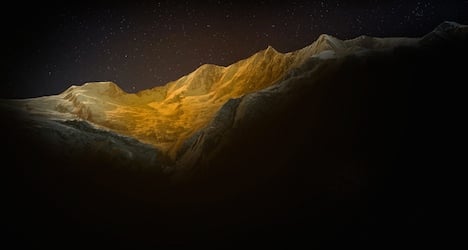 They expect around 100,000 people to watch the simultaneous illuminations to fete the canton’s entry into Switzerland in 1815.

The canton recommends as best spots to view the light show places in Saas-Fee, villages in the Val d’Hérens, Ovrannaz, Verbier and various villages in the Portes du Soleil ski area, such as Champéry, Champoussin, Les Crosets and Morgins.

The lights on the Dents du Midi will be visible as far away as the Lake Geneva region.

The illumination was developed with a 350,000-franc budget and involves 70 guides who who helped place the flares, the ATS news agency reported.

A video to promote the event highlights a test conducted in November 2013 in Arolla.

One of Valais’ most famous mountains is excluded from the festive program.

A few months ago, climbers used glowing red beacons to illuminate the route taken to the top of the Matterhorn, 150 years earlier.

Check out the video showing the test illumination in Arolla: