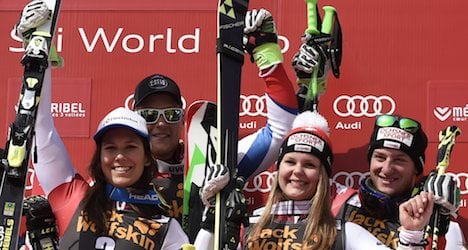 The quartet of Wendy Holdener, Justin Murisier, Charlotte Chable and Reto Schmidiger ended up in a 2-2 draw in the final with Swedes Sara Hector, Mattias Hargin, Anna Swenn-Larsson and Anton Lahdenperae.

But the Swiss clinched first place with a tie-breaking time of 0.09sec over the Swedish quartet, thanks largely to healthy wins by Holdener and Schmidiger over Hector and Lahdenperae respectively.

Sweden had earlier knocked out Austria in the semifinals, but the Austrians took third place with a 3-1 victory over Italy.

Eva-Maria Brem set the Austrians, missing such stars as Marcel Hirscher and Anna Fenninger, rolling, and while Simon Maurberger drew the Italians level, Carmen Thalmann and Philipp Schoerghofer made no mistake in their runs.

Only seven teams entered the team event, which fell after the downhill and super-G and came before the slalom and giant slalom this weekend.