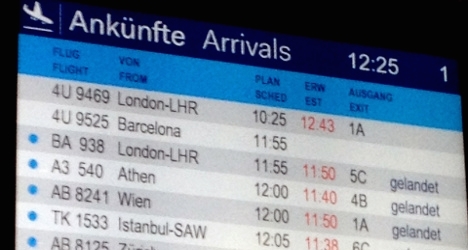 The arrivals board at Düsseldorf airport. Photo: AFP

The carrier confirmed that 144 passengers and six crew were aboard flight 4U9525 from Barcelona to Dusseldorf, which crashed in the southern Alps.

Most of the passengers were from Germany and Spain.

It was not known immediately if any Swiss passengers were on the plane.

The Local Germany reported at mid-afternoon that Germanwings cancelled flight 4U9764 from Düsseldorf to Zurich.

It said “long lines” were forming at the check-in desk.

French President François Hollande said that there were no survivors from the crash, offering condolences to the affected families for this "tragedy" on French soil.

No immediate explanation was forthcoming on why the plane, an Airbus 320 dating from 1990, went down.

The crew did not send a distress signal, although air traffic controllers lost contact with the plane, a spokesman for civil aviation authorities told AFP.

French emergency services were struggling to get to the accident scene as approaching snow made search and rescue operations difficult.

For more coverage check The Local Germany and The Local France.